Post by Robin from France » Subscribing Member » Sun Oct 29, 2017 2:37 pm
Joined: Thu Jan 02, 2014 2:17 pm
Posts: 112
One more check - I removed, cleaned and refitted the three bolkhead plugs. All were clean and bright. Also removed the dask (along with a fair amount of skin from the backs of my hands. The buldholder contacts are clean and clipped into the plastic part, and the bulb is fine.

Time to order a regulator and brushes? 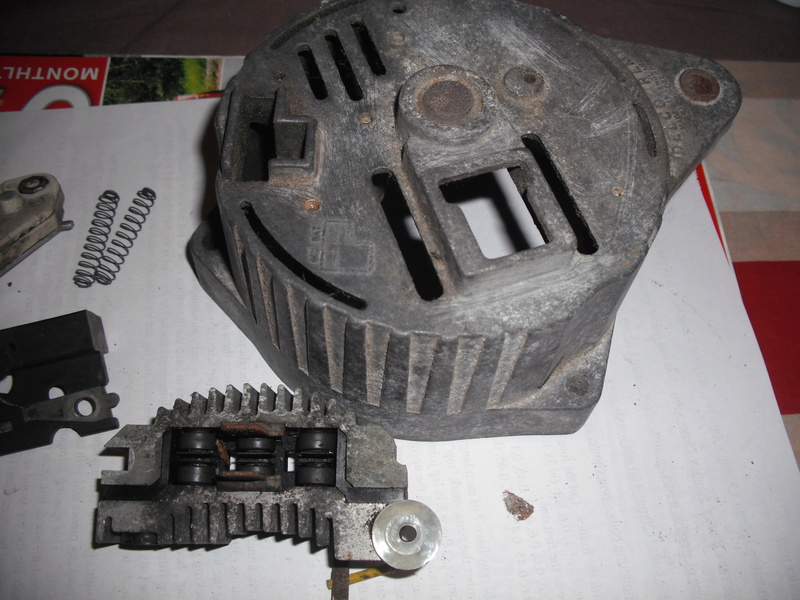 If the unit off the vehicle is the same then it explains a lot: you could have the earlier '5-wire' battery sense unit with regulator requiring the thin brown wire!

Machine sense units should have just the warning lamp terminal within a smaller aperture in the casing. Later regulator (and later diode pack) can be retro-fitted to earlier units with aperture for 3-terminal plug, just to confuse things.

so if I now re-join the previously cut off thin brown wire to the BAT terminal on the regulator, this could be the source of my woes?

I've had a look at the Wood Auto website and identified the required regulator and slip ring too, both at very competitive prices, but the brushes seem to go by size. Mine look like 5mm by 8mm by (probably) 15mm length. I'll order the parts anyway, because then I can rebuild the other alternator as a spare.

Thanks for your help once again,
Robin
Top

Delco components do vary according to date stamp on the casing and also according to what has been fitted during service.

Main difference to watch for is the through bolts; on later units they're threaded into the slip ring end bracket instead of the drive end bracket and the rectifier and bridge assembly is dimensionally different to the earlier type.

I can't remember whether brushes changed in production units or whether differences are after-market modifications to go with differences in brush holder or springs.

Eyeball mk 1 and a measuring stick usually will be enough to work out which bits are needed for a particular unit.

Have you checked the warning lamp lights when the wire is grounded? If it doesn't then try a working bulb holder and bulb from another socket.
Top

Post by VDUB384 » Club admin » Mon Oct 30, 2017 8:25 am
Joined: Wed Sep 12, 2012 9:01 am
Posts: 1592
Hi Robin your right with the brown/ yellow stripe going to IND,you should have the thick brown from the starter solenoid going to BATT and a decent size Black going from the GRND to the alternator bracket. If you have no wire going to the BATT terminal on the alternator it will not charge but will show a higher voltage.
Dave
Whilst good maintainece is the best prevention"If its not broken don't fix it."

now I'm totally lost! I've reconnected the smaller brown wire to the BATT terminal on the regulator, and the charge light is still coming on at anything over tickover. I'm getting up to 15v at the battery, which drops to 13v when the lights and heater are on. (no danger of cooking the battery)

The yellow/brown lead shorted to earth does no make the dash light come on - but don't understand how it could. I simply unplugged the lead from the alternator and touched it to a clean earth with ignition on.

The bulb is clearly working as it varies with engine speed. It also glows dimly with ignition on before starting.

Is there any way I can make up a complete new loom to test the alternator? I need a heavy cable for the + terminal to the Starter solenoid, another heavy cable to earth, then two lighter wires, one to the bulb and the other to what?

I'll order the parts anyway, to rebuild the other alternator.

Thanks again for all the help,
Robin
Top

Post by VDUB384 » Club admin » Mon Oct 30, 2017 12:49 pm
Joined: Wed Sep 12, 2012 9:01 am
Posts: 1592
Robin you need the thick brown wire from starter solinoid to go on the BAT terminal the thin brown/yellow stripe on the IND and a thickish black from the GRND to the alternator bracket it's as simple as that.
Dave
Whilst good maintainece is the best prevention"If its not broken don't fix it."

I've come to a successful conclusion of sorts, by substitution. I had another suspect alternator from a facelift CF I dismantled long ago. It was untested, labelled Ford,and had terminals B+ and D+ (B+ for the charge, D+ for the warning light). It fitted the same bolt pattern and, hey presto, the warning light goes out above tickover and the battery charges at 14v.

This is a stop-gap solution as I'm going to rebuild the original (Lee Brook at Wood Auto is sending me the parts) and I also suspect that the dash light isn't as bright as it should be (it's never brightly lit, but just glowing before starting and when the tickover drops) so more tests will be needed.

Thanks again for all the help.

A reason for the L-shaped wiring plug with 3 terminals is earlier Lucas '5-wire' 15ACR and 17ACR alternators that required an external link between the IND (warning lamp) terminal and a separate F (rotor field) terminal.

Delco '5-wire' units meanwhile had the same shape aperture to be compatible for using either Lucas or Delco units for earlier CF production models. However, Delco units didn't need the brown+yellow loop-back wire, just B+ and IND.

Then along came '2-wire' units, which is what I thought you were dealing with until you posted photos of bits. (I come across very few '5-wire' units these days, usually as old units for bits when replaced by a '2-wire' machine.)

So, for '5-wire' Delco with 2-terminal regulator the brown+yellow loop-back wire can be deleted but the thin brown wire to B+ is needed as well as brown+yellow for IND for the warning lamp.

The warning lamp is wired to have system voltage one side via the ignition switch with alternator output voltage via the diode trio on the other side.

When the alternator is working properly both voltages should balance and the lamp won't light.

When the alternator output is zero the ground path is via the rotor windings and the lamp should light but may not seem as bright as the oil warning lamp because of the rotor windings resistance of about 3 Ohm (net voltage drop about 1V).

Lamp glowing dimly before starting indicates an unwanted resistive connection somewhere in the rotor circuit, usually due to worn brushes or faulty regulator.

Lamp brightness changing with engine speed can be due to over- and under-voltage output from the alternator; 15V at the battery terminals confirms over-voltage, usually due to a faulty regulator.

Thin brown wire for B+ should terminate at the starter solenoid alongside the thicker brown wire. This is to avoid voltage drop in the thicker wire affecting the B+ voltage.
Top
Post Reply
19 posts