The 3 pin plug is different. The current alternator has an L shaped plug, where the new one has a straight 3 pins. 2 are large 9.5mm with the 3rd being a standard 6.3mm male.

Could anyone tell me how to marry up the old with the new?

Many thanks,
Finn.
Top

The L-shaped plug is a legacy from the original 5-wire system and is suitable for a later standard 2-wire unit. For an alternator rated at 45A or more this plug should be cut off along with the second plug if it's still dangling from the engine harness; disconnect starting battery earth lead first and also earth lead(s) of additional battery or batteries if not isolated by switch or relay.

Check that the new alternator has common output to both 9.5mm terminals, usually the case these days for units rated over 40A because 9.5mm wiring terminals for 6mm² cable usually can't cope with much more than 35A for very long. For the additional terminal a second wire of the same thickness as the original thick brown wire (84 x 0.30, 6mm², 42A capacity for CFs up to 1980) will be needed for an alternator rated up to 80A output.

The new thick brown wire should be connected to the starter solenoid battery terminal where the original thick brown wire should be connected. If this is done first (crimp and solder best, with heat shrink tubing to support the wire past solder creep along the strands) with plenty of wire spare then the rest will come easier than starting at the alternator end. Follow the engine wiring harness with the new wire and cable tie in place with insulators (rubber hose split along its length) where wiring can chafe against clips or edges.

At the alternator wrap the new wire to the two existing wires leaving enough length for connecting the terminals. A 3-terminal alternator plug with flag terminals or two separate 9.5mm terminals plus a 6.3mm terminal will be required. 9.5mm non-insulated terminals for 6-10mm² cable with slip-on insulators will be best although they may be awkward to get onto the alternator terminals because they can grip so tight. A 1mm² 6.3mm terminal will do the job for the warning lamp wire and a pre-insulated type should be fine as long as it won't tug off the wire. Crimp and solder connections on the 9.5mm terminals for peace of mind. It may be best to avoid pre-insulated 9.5mm terminals because they're prone to failure here with usually being on the lightweight side even with yellow insulators and the insulators can soften when warm and lose their grip on the wires.

If the alternator has provision for an earth wire (e.g. Bosch unit with longer stud at the back) then add one with cross sectional area equivalent to both the output wires together, or double up using the same thick brown wire as the new output wire. Crimp and solder eyelet terminals to the earth wire as for the output wires and connect to the alternator earth point and one of the 4 alternator bracket bolts using a star washer between the eyelet and bracket bolt head.

Once the alternator is fitted and any wiring faults elsewhere are sorted check for the warning lamp coming on bright when the ignition is switched on and then going off as soon as the engine runs. With just the starting battery connected the alternator output should soon level out at around 14.5V measured across the battery terminals if the battery is in good condition. With a deep cycle ('leisure') battery connected the voltage shouldn't dip much - normally it should draw about 30A tops even when discharged - but if a starting battery is used as an auxiliary and it's a bit flat then the voltage will dip at first before coming back up.
Top

I installed the alternator & wired it up as described. The original was actually a 5 wire/2 plug item. I've discarded the light gauge brown wire that went back to the solinoid and it is charging nicely when checked with the multimeter. The charge light is still coming on so I'll have to go through the list of checks there, but in real terms it's putting 14.2V into the battery.

The fan/alternator belt snapped after about 20 miles so I fitted a spare that was in the van, but it squeals like a banshee. I've ordered a couple of new 10mm belts and a 13mm. The alternator & fan pulleys look like 13mm while the crank pulley looks like 10mm. Whats involved in changing the crank pulley for a 13mm?

High output alternator may be too much for a single belt when there's a fair demand. If a new belt squeals after it's been re-adjusted once it's bedded in then a work-around is to use belt spray, e.g. Hycote Belt Slip (under Maintenance Range), Carplan Belt Up etc. Magic stuff.

I have picked up an AC Vauxhall alternator which has a two plug system would have a wiring diagram for that type of unit? 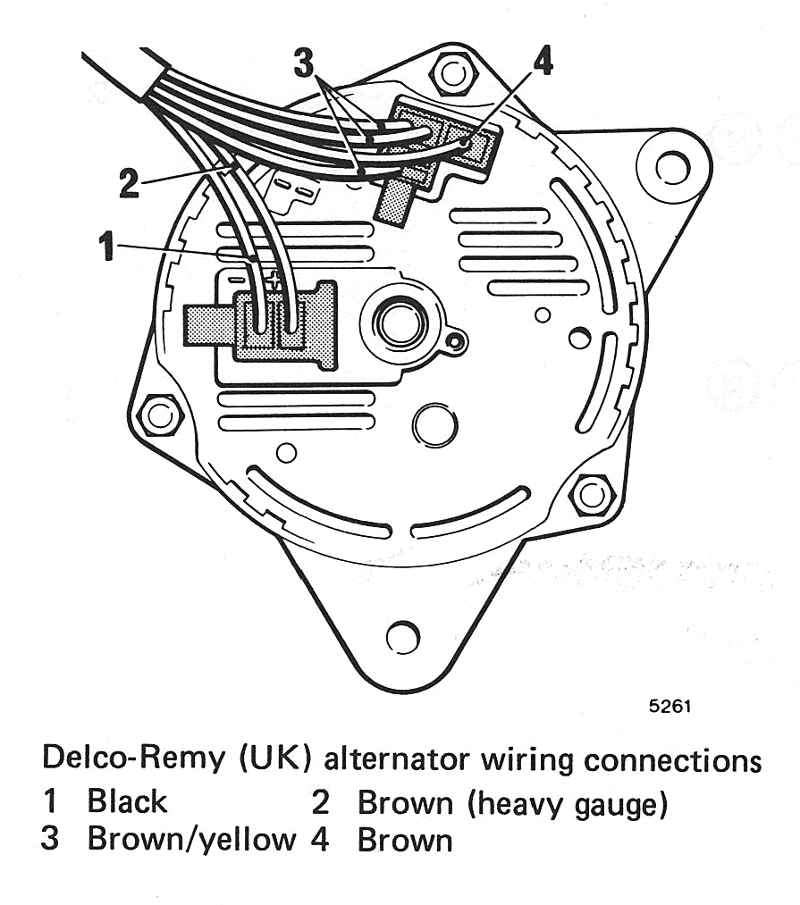 Kooda wrote: ↑
Fri Nov 14, 2014 7:41 pm
I picked up a '79 Autosleeper with a 2.3 slant last week. Driving in rain with everything on the charge light was coming on so I don't fancy its chances of charging the house batteries too. So I bought a high output alternator from ABC.

I know it's an old topic, but it seems that you exactly found what i'm looking for.

Where can I find a hight output alternator for a slant4 ?
Top
Post Reply
7 posts • Page 1 of 1